High Tech is not always the Right Tech

As modernism has advanced over the centuries there has been, or at least prior to the early 20th C this strange idea of mankind's triumph over nature. This was brought about by advances in technology and there was a sense of unwavering optimism and pride in the pace of change in the Western world, especially as the Industrial Revolution steamed ahead. That idea has however faded with time. It is not that we have lost hope for what advancements can be made technologically and how in turn that may impact on our lives and quality (and perhaps longevity) of life. Rather, with events such as the sinking of the Titanic (the "unsinkable" ship) and other disasters- both natural and man made, we have begun to realise that we can't put ALLour faith blindly into technology and perpetual "progress." Furthermore the horrors of modern industrial warfare especially in the two World Wars and the atrocities in the 20th C compounded this. With the advent of nuclear weapons, mankind has built and continued to develop weapons that - for the first time in history - we could actually end up wiping ourselves out. As if this wasn't bad enough, we have come to realise the extent to which we have been recklessly damaging our own environments, our own biosphere, the earth our only home. There is nowhere else to go. And we need to start making some large and systematic changes NOW although exactly what and how is still being determined by world leaders.


In the relatively recent past the answer would always have been based around dramatic change, what singular event, revolution or breakthrough technology could we use to save ourselves? 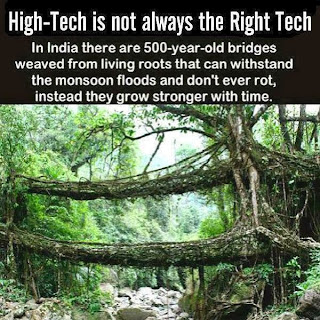 What ancient people seem to have understood, and we today seem to have forgotten, is that sometimes one answer does not fit all, sometimes technology alone is not the answer to all our problems, and where possible we should work with nature - then we all win! That does not - nor ever has - meant to give up on technological innovation or on civilization itself. Just, to think carefully about the best ways forward...and in some cases, the high-tech soloution might not always be the right tech soloution.﻿
Posted by Unknown at 00:30