Summer Solstice Stroll through the Labyrinth

It is always rather perplexing that even in the heat of summer we in Australia  are surrounded by (mass marketed consumerist) images of a nostalgic white Christmas, complete with Santa in Sami-like costume, polar reindeer pulling a sled and landscapes dotted with North American or Eurasian conifers or the occasional snow man. But why not - it's Christmas time after all. Aside from all the normal Christmas-ness, I thought I would also go to some other borrowed Northern hemisphere tradition-based events that have been adapted more appropriate for the season here and the Summer Solstice.

Of course, in Europe, Northern Asia and North America there would be a range of traditional, semi-traditional, traditional inspired and not-so-traditional-at-all  midsummer festivals and events to attend. And there would be plenty of people, festivities and general merriment at them. Meanwhile in Australia, not so much.

So on Saturday the 21st of December I enjoyed hanging out with the Melbourne Heathen Moot and participating in an energetic rite somewhere between a blot and a sumbel. On the next day I enjoyed meeting up with the Druids of Silver Birch ADF for Summer Solstice celebrations and picnic feast at Rushall Reserve, not far from the main city of Melbourne. The sun was shining but it was luckily not too hot and native plants were blooming, the fragrances drifting through the air while the sound of kookaburras calling and the Merri Creek bubbled along in the background. Since it was such a nice day I decided to go for a bit of a walk.

From the flat stone spiral of Rushall Reserve, past the community garden and on to Rushall station I had a pleasant and scenic stroll through Rushall and the surrounding reserves, following the meandering Merri Creek with it's otherworldly yet seemingly harmonious fusion of native and European flora. Wild Oaks, elms, ash and  weeping willows, and yet silver wattles, narrow leaved-peppermint Eucalyptus and hop goodinia side by side in place. The path is doted with the occasional long-forgotten concrete, brick and cobblestone ruins of an older Melbourne, contrasted with more modern trail markers, boardwalks and drinking fountains, and this combination of old (although relatively recent in historical terms) and modern is embodied in the red brick or blue stone Roman arches of colossol traffic bridges you must pass through on the journey, following the city head trail. I passed signs indicating a local Friends of Merri volunteer community group was active in revegetation works and was surprised to see signs warning about snakes or advising that echidnas lived in the area, so close to the city! I saw more wildlife than I expected too, not only the expected introduced birds and magpies and wattle birds, but rainbow lorikeets, honeyeaters, families of ducks with ducklings, skinks and a big blue-tongued lizard. I met a number of pleasant and friendly local walkers, joggers and cyclists on the way, and thought that with this green web and lung of fresh air, such a place would be a nice place to live if you lived close to the city. Interestingly there was also some rather different graffiti in some places including a rock-art style  horned figure with a spear sprayed onto a wall and a stone carved with New Grange styled spirals and 2 horses that had been painted white to emphasise the markings.

Along the way I was surprised to come across a labyrinth! Being only a stone outline on the ground this labyrinth was safely free of King Minos' Minotaur, although in a similar pattern to much of the "labyrinth" style symbolism found in carvings (and the shapes of various folk dances!!) from the Balkans to the Baltic. Although the symbolism is not completely understood it often involves a katabiasis - a journey 'against life' into the (symbolic) underworld and a triumphant return to the land of the living. And in a homage of sorts to that tradition, this labyrinth bears a sign on a nearby cairn of stones welcoming passers by to walk through the labyrinth as a personal reflective and meditative quest. The labyrinth is located at Hawson's Hollow, Clifton Hill (Melways ref 2D: E2) and was built by local residents over the summer of 2001 - 2002. Out from the shade of the adjacent 'wishing tree, where people tie up their wishes,' a mysterious lady with a lovely pentagram necklace and in a long black flowing felt dress approached me and said 'I think you should walk the labyrinth' and I replied 'I may just do that', to which she insisted 'Oh, I think you should. I think you'll get a lot out of it.' Given that it was the Summer Solstice, I wasn't that surprised by this. I can't say I had any personal revelations per se in the labyrinth, but controlling your steps and breathing, maintaining your balance thought the narrow winding knee-high passages does seem to help facilitate a mental state somewhere between reflective alertness and a quite deep meditation, and if nothing else it can aid you in re-evaluating various things going on in life and approaching solutions from previously unconsidered paradigms. And admittedly I felt good afterwards, so at least being able to try the experience was well worth it. Thanks for the encouragement lady in black!

As I continued on to the Quarry Park I was able to see some of the geological history in rocky out crops, with scant signs of tool marks, a interesting menhir-like stone sign, a stone shamrock memorial marker with a Gaelic inscription, the ruins of the Aboriginal School and after the pleasant roughly 45 minute 3km walk I arrived at Yarra bend state park where the Merri Creek joins the Yarra and then flows into the broad thundering Dight's Falls.

A nice way to spend the afternoon on the longest day of the year, don't you think? Try the walk sometime for yourself. 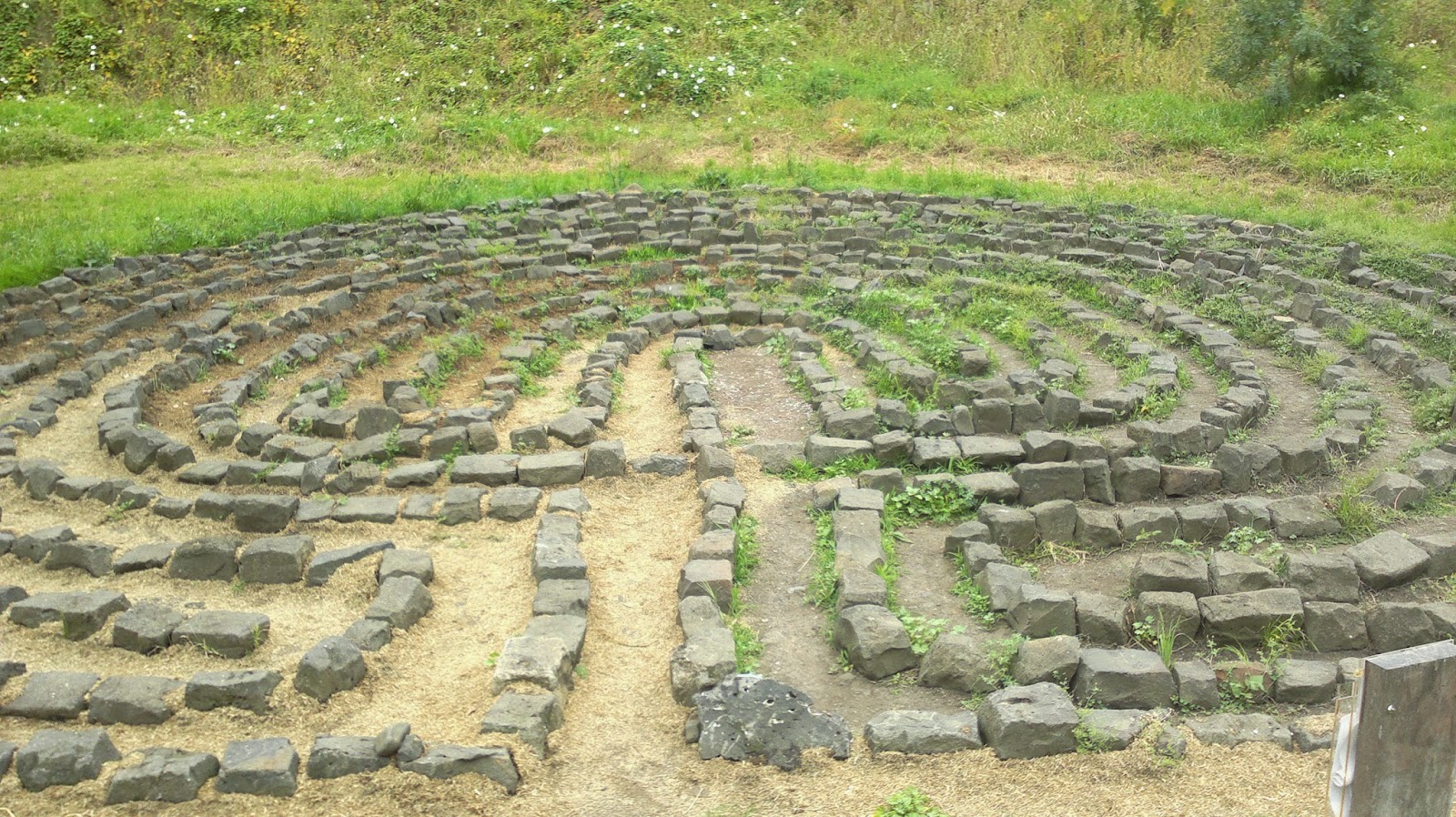