How Old is the Melbourne University Scandinavaian Club?

How old is Scandinavian Club? 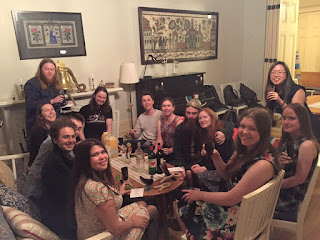 We often get asked 'Just how old is Scandinavian Club anyway?'. The short answer is usually - we don't know. It has been lost somewhere in the mists of time.
So far attempts to find out from the student union havn't yielded much. They only keep records for a certain number of years. And they are not there to be our personal archivists, but have to work long hours just to keep the Clubs and Societies of today's University of Melbourne going. Likewise a bit of time searching the web has not revealed anything either.
In my own experience, I know that club has existed largly in its present form with the usual cycle of core events and weekly game of kubb accompanied by pizza and conversation since 2006, when I started my first degree and studying Swedish. Admittedly,  my own classes often clashed with Scandinavian Club, so I didn't become a regular until 2009. The oldest emails in the club email account indicate that the club was affiliated with the student union at least since March 2006. In 2005 I took modern history at the university of melbourne for a year while still studying in year 12 and was vaguely aware that the club existed, which was later re-enforced as I went to a seminar on Open Day in the middle of that year where Scandinavian Club was spoken about in relation to the Swedish department.
I have been able to track down a few photos (viewable in our photos on this page) which show that we had the flags from 2007, the Swedish flag from at least 2006 and the kubb set from at least early 2005.
Recently I stumbled across an extract from the Department of German, Russian and Swedish (http://grs.unimelb.edu.au/activities_and_links/clubs_and_social_activities.html) :
Melbourne University Scandinavian Club

What is it?
The Melbourne University Scandinavian Club is a cultural and social group consisting mainly of students of Melbourne University and young Scandinavians visiting Melbourne.
What do we do?
The club hosts social gatherings, such as pizza nights, pub crawls, film viewings, etc, as well as an annual camp. The club also liaises with other overseas interest clubs, both at Melbourne and other universities, providing opportunities for cultural exchange with non-Scandinavian oriented groups. It was in early 1999 that the club changed from the narrower-focussed "Bellman Society", which was a society only for students of Swedish at Melbourne University. Now, all interested parties are welcome to join.
Who are our members?
Members of the Melbourne University Scandinavian Club are active students, enthusiastic about travelling and passionate about their origin or interest in Scandinavia. At a time when students at universities across Australia are becoming ever less interested in the extra-curricular facets of university life, the mystique and fun typically associated in the minds of Australians with Scandinavia makes membership of the Scandinavian Club a unique experience which should not be missed!
Where can you get more information?
You can email us at scandinavianclub@hotmail.com
We hope to see you at our next event!

So the club at least goes back until 1999! And that prior to this it existed via a predecessor club the "Bellman Society" (in reference to the famous 18th C.  Swedish poet Carl Michael Bellman). Interestingly they choose to decribe the Bellman Society as 'only for students of Swedish at Melbourne University' it looks as if it was a literature, poetry (and perhaps homework) orientated club rather than the more cultural/social club we have today.

This document is still a work in progress...so if you have any more information to add to it by all means.


The Melbourne University Scandinavian Club, which had very few students, was founded in 1989 and is still running. Its growth fuelled an international exchange cooperation agreement between universities in Australia and Scandinavian countries.

A search of the Melbourne University Scandinavian Club's facebook group found Maria, and upon asking her, it was indeed the same journalist. We were able to confirm that she found this information on the old homepage and called the contact number listed. She confirmed that she was told it was founded in 1989! Thus adding a decade onto the known history of "Skandi club." We are very glad to have found this out!!Tak,Dean Hallett,President, Melbourne University Scandinavian Club. 19th of August 2015.


UPDATE 3: It appears that Swedish had a lectureship at Melbourne University at least since 1969 and it is possible, ney probable that the Bellman Society was formed then, as an informal and/or faculty club, or between then and 1972 at the latest. The significance of 1989 is still unresolved, but it would make sense if that marks the time the Bellman Society became affiliated with the Student Union. Ten years later in 1999 marks the change of name and focus for the same club to become the Scandinavian Club as we know it. Interestingly Old Icelandic/Old Norse was the 6th language to be taught at the University from 1944! Augustin Lodewyckx gathered a group together after his second visit to Iceland which appears to have been the fully functioning earliest form of the Scandinavian club, the "Íslandsvinna félagiô [sic] (The Society of the Friends of Iceland)" [I think it should be félagið? Literally "fellowship"]. This group lobbied and suceeded in establishing Old Norse and by extension, Swedish which came into the same department in 1969, we believe. This group held weekly meetings, provided food, studied Scandinavian languages, taught Melbourne University students and lobbied for Scandinavian language study at Melbourne University, had an Icelandic flag and welcomed visiting Scandinavians and Scandinavians settling in Australia. Some of it's members and the Swedish lecturing staff were involved with the later Bellman Society, so The Society of the Friends of Iceland appears to be the earliest form of the Melbourne University Scandinavian Club back in 1939!!!'in 1939, he gathered together a group of people who were fascinated by his descriptions of his travels. The members of this group kept regular meetings at "Huize Eikenbosch", the Lodewyckx home, and adopted the name of Íslandsvinna félagiô (The Society of the Friends of Iceland).'See the following (which I was able to download from the University of Melbourne Library and upload into the club documents):StanleyMartin, J 2008, 'The teaching of Old Icelandic at the University of Melbourne 1944- 2007', Nordic Notes, vol. 12, pp. 6-17.The Anna Lodewyckx Scandinavian Scholarship still exists, though few can access it (http://arts.unimelb.edu.au/award/anna-lodewyckx-scandinavian-scholarships)Sadly "Viking Studies" Old Icelandic finished in 2007. I was in that final year and helped co-ordinate and run the Symposium 'Vikings and their Enemies' as a send off for such a long standing and well loved area of study at the University of Melbourne. Some of the ex-Viking Studies students kept an Old Norse reading group with me, going over 2008 but by 2009 people were finishing degrees or moving on and the reading group ceased to be. Between 2008-2011 Medieval History subjects covering the Dark Ages and the Vikings were also systematically culled.Swedish was phased out between 2010-2012. In 2012 only advanced Swedish was offered for students who had completed the prerequisites and no new beginers or intermediate students were taken on. ( https://handbook.unimelb.edu.au/view/2012/888SW?output=PDF) By 2013 no Scandinavian languages, history, culture or literature were taught at the University of Melbourne. The Scandinavian Club had long been friendly with but not dependent upon faculty departments from the School of languages. This brings us to the present, where the Melbourne University Scandinavian Club is the last survivor of a long and rich history of Scandinavian languages, history and culture on campus.