How Ancient Philosophy Saved My Life

I think this is a very positive and useful article by Jules Evans, that was published in The Times (details at bottom of the article) giving a powerful, persuasive and very personal perspective on how ancient philosophy can offer psychological tools for recovering or maintaining a state of good mental health and sense of well-being.

How Ancient Philosophy Saved My Life

It was around this time of year, just over a decade ago, that I had a breakdown. During my three years at university, my mental health had got worse and worse. It started with panic attacks, that arose out of nowhere like tornadoes. Then came the mood swings, depression, and a general feeling that I was no longer in control of myself.

What terrified me was the prospect I’d permanently upset up my neuro-chemical balance with drugs. My friends and I had messed around with LSD and Ecstasy, and had some good times, but I’d seen friends get badly hurt and sent to mental homes. If my own depression and panic attacks were neuro-chemically determined, then perhaps there was nothing I could do about it, other than take different drugs for the rest of my life.

My literature degree couldn’t help me get a handle on what was going on inside me. It meant I could analyse the feelings of Hamlet or Madame Bovary, but my own emotions were beyond my comprehension or control. Hamlet may have been another youth ‘blasted with ecstasy’, but I think Shakespeare had something else in mind.

I didn’t discuss my problems with my friends or parents, out of a masochistic sense of shame. But finally I was forced to ask for help. The therapist I saw after graduation wasn’t much use, so I did my own research on a new invention dubbed ‘the internet’, and discovered that depression and anxiety were treatable either with anti-depressants, or with a talking therapy called Cognitive Behavioural Therapy (CBT).

I still clung to the old-fashioned idea that I might be able to reason my way out of my problems, so one evening, I went along to a CBT support group that met in the Royal Festival Hall in London every Thursday. There was no therapist present, just a group of people coming together to help each other. We followed a CBT audio course someone had bootlegged from the Net, practiced its exercises, and encouraged each other on.

It worked. After a few weeks, I stopped having panic attacks, and haven’t had one since. My depression also cleared up, although more slowly. The road back to mental health took many years and I’m still on it (we all are). Others, of course, find anti-depressants more helpful, but in my case I’d say CBT saved my life.

By that time, I was a trainee journalist, so, while reporting on the German mortgage-bond market (as thrilling as it sounds), I quietly started to research CBT. One day, I got on a plane to New York to interview the pioneer of CBT, Albert Ellis, on his death-bed. I did the last ever interview with him before he died, and got the chance to thank him for his work.

Ellis told me he had been directly inspired by ancient Greek philosophy. He’d trained as a psychoanalyst, but hadn’t seen much progress in his patients, despite seeing them sometimes every day for years. Then, in the early 1950s, he’d read a line from the Stoic philosopher Epictetus: ‘Men are disturbed not by events but by their opinions about them’

That inspired his new cognitive approach to emotional problems, which is based on the Greeks’ theory that our emotions follow our beliefs about the world. ‘The soul’, as the philosopher and Roman emperor Marcus Aurelius wrote, ‘becomes dyed with the colour of its thoughts’. If you change your thoughts, you change your whole experience of the world.

Almost all the philosophers of ancient Greece shared this cognitive approach to the emotions. Socrates, the Stoics, the Epicureans, the Sceptics, the Cynics and even the great Plato and Aristotle, all believed that philosophy is a form of therapy that can make people happier and more fulfilled, by teaching them how to examine and change their beliefs.

First of all, we need to become conscious of our habitual thoughts, and how they create our reality. We can do this by engaging in a Socratic dialogue with a therapist or friend, or by tracking our beliefs in a journal.

For example, I realised my emotional problems came in part from my values. I put too much emphasis on winning others’ approval, and this made me alienated (which comes from the Latin alienus, meaning ‘to make a slave of yourself’). Socrates and his followers taught that we can take back possession of ourselves, by choosing intrinsic values like wisdom rather than extrinsic ones like status or power.

Once you’ve examined your beliefs and tried to make them more wise, you need to turn your new insights into new habits. The word ‘ethics’ actually comes from the Greek word for habit.
The Greeks had many techniques for creating new habits. They made maxims, for example, catchphrases to be repeated over and over until they stick in our memories, like Marcus Aurelius’ phrase: ‘life itself is but what you deem it’. They’d also carry little handbooks around with them, so that the teachings were always with them. CBT uses these same techniques.

And the Greeks understood, perhaps better than CBT, that it also helps if you find a group or community that shares your new way of thinking, so that your ideas become a shared culture. The Epicureans, for example, left Athens to live in a philosophical commune called the Garden. Their commune was like a lifeboat of wisdom bobbing on the sea of a toxic culture.

The best modern self-help groups understand the importance of group dynamics to self-transformation – think of Alcoholics Anonymous, or Weight Watchers, or the support group I went to in London.

There was also a political aspect to ancient philosophy. Some philosophers, such as Plato and Aristotle, believed that, to heal ourselves, it is not sufficient to change our own individual beliefs. We also need to change our whole society, and infuse its culture with wiser values. Though of course this can be risky – our society might not want to be changed. Ancient philosophers were often getting exiled, or even executed, for criticising the ruling powers.

CBT is very careful to drop any mention of politics or culture, because such matters are controversial and hard to prove scientifically (you can’t do a randomised controlled trial for an entire society).
But today, governments are coming round to Aristotle’s idea that citizens should be taught the art of living well. Politicians’ new willingness to teach well-being to the masses partly comes from CBT, which has provided an evidence base for the ancient Greeks’ insistence that some ways of living are better, wiser and healthier than others.

Governments have started to use public policy to disseminate CBT and its younger sister, Positive Psychology, in schools, in the NHS, in job-centres, armies and beyond. Many countries, including the UK, have also started to measure ‘national well-being’. The welfare state is turning into the ‘well-being state’, with governments aiming to raise our well-being from a 7 to a 10.

This is exciting, but also risky. The well-being state could conceivably turn into an illiberal monster, where citizens must wear forced smiles or risk being diagnosed as sick. There is this dangerous idea that empirical science can ‘prove’ one model of well-being, and because it’s proven, governments can impose it on their citizens without their consent.

In fact, there’s not one path to the good life, but several. The ‘science of happiness’ is still quite crude, and its evidence mainly consists of simplistic questionnaires. And Socrates insisted that thinking about the good life for ourselves is is an important part of the good life. We shouldn’t give too much authority to scientific experts, but rather decide for ourselves what the good life, alone or in philosophy groups.

Despite these concerns, I’m excited by the new fusion of ancient philosophy and modern psychology. If I hadn’t come across it, I’d still be stuck in misery. Socrates showed us that we all have the power to heal ourselves and change our characters, at any stage of our lives. We might not become perfect sages like him, but I believe we can all become a little wiser and happier.

Focus on what you can control, accept what you can’t
Rhonda Cornum was a US Army medic when her helicopter was shot down in the first Gulf War. She was captured, assaulted, and held as a POW. She came through that situation without being traumatised, she says, because she focused on what she could control – her thoughts and beliefs – without freaking out over what she couldn’t control. That attitude is at the heart of Stoic philosophy. Cornum went on to teach resilience to the entire US Army.

Choose your role models wisely
Louis Ferrante grew up in a bad neighbourhood in Brooklyn, and imitated its leading role models, who happened to be gangsters. He joined the Mob, and was in prison by the age of 22. In prison, he came across Plutarch’s Parallel Lives, and was inspired by Plutarch’s idea that we can choose better role models by reading the biographies of great figures from history. Louis turned his life around, and became a campaigner for prison literacy programmes.

Keep track of yourself
The Greeks warned that we often sleepwalk through life, blindly assuming our intuitions are correct. So they urged their students to keep an account of themselves, by tracking their thoughts and behaviour in a journal, like Marcus Aurelius used to do. His Meditations, one of the most famous works of western philosophy, is really his personal thought journal. We can keep track of ourselves today by using self-tracking apps on our smart-phones, to track our moods, diet, exercise, spending and so on. 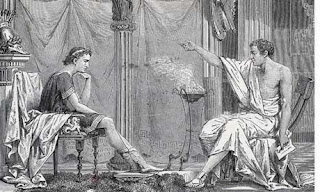 Jules Evans is the author of Philosophy for Life, and Other Dangerous Situations (2012).
This article was published in The Times on 8/5/12, and on Jules' blog at http://philosophyforlife.org/
Posted by Unknown at 04:17

Email ThisBlogThis!Share to TwitterShare to FacebookShare to Pinterest
Labels: philosophy