Ishtar is NOT Easter!

Around Easter time this year the following image went viral across social media: 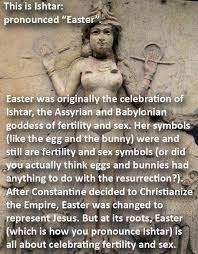 Disappointingly this misinformation began popping up all over the Internet, I first came across it in my news feed from a friend's comments as it was shared by the Richard Dawkins Foundation for Science and Reason page.

I actually wrote a number of detailed responses at the time, tailored to suit the needs and detail required of whichever friend or page I encountered this picture simply shared and past along as a (false) fact without a second thought. Fortunately many other people started doing the same, and as quickly as the fad appeared, it disappeared. Hopefully this doesn't become a perennial Easter nuisance. The gist of what I said went something like this (remember this is from a social media context, so it was hardly intended to be an essay):


The Old High German month (and festival within it) of Ostara and the deity Eostre are cognate. Easter comes from the Old English word Eostre to mark the festival and an associated month according the Venerable Bede [Edit: He is the only primary source to record this]. They come from a root meaning east and dawn. Eggs and hares (not rabbits which are indigenous to Spain) were associated with her and she is a goddess of abundance and fertility in nature and agriculture.
Ishtar has no direct connection to Easter festival or Eostre. Ishtar is pronounced Ish-tar not easter and its etymology is unknown, but probably derives from a title. There is no linguistic link between Ishtar and Easter. She is goddess of lust, sex, war, battle, passion etc not as is often mistranslated love (our modern concept of romantic love is absent from known Mesopotamian texts), and possibly human fertility (indirectly, because of sex, but she would be better identified with sexual pleasure rather than procreation, birth etc) but definitely not of agriculture! or nature. Her animal is the lion.
Synchronicity and over cross-identifying things is largely a modern idea, although it was used by the Romans and Hellenistic Greeks as a tool for political control (interpratatio). It is ALWAYS better to treat cultures and deities as distinct unless there is very good evidence to show otherwise, especially 2 cultures living on 2 different continents in 2 different Milena!
How do I know all this? Well after 5 years of studying archaeology and ancient languages at uni, including Old English and Akkadian, I might have noticed a thing or two about this. So I can assure there is no serious scholarly school of thought today that would link Easter and Ishtar.

This is a modern depiction of the Anglo-Saxon deity Eostre 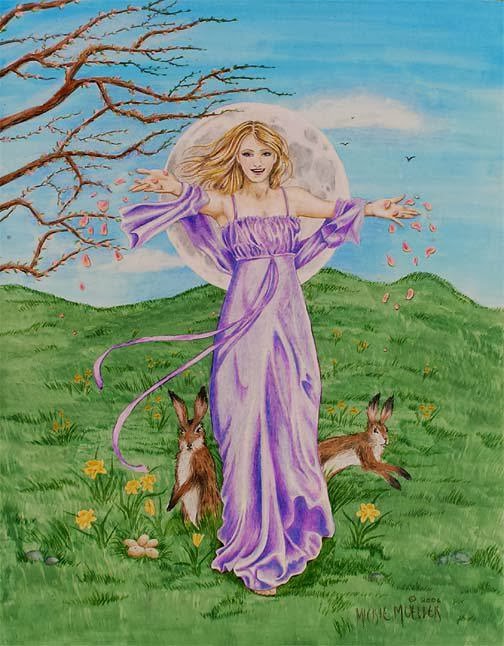 The image at the top of the page is a well known representation of Ishtar from the British Museum known as "the Queen of the Night." http://www.britishmuseum.org/explore/highlights/highlight_objects/me/t/queen_of_the_night_relief.aspx

It is still not understood for sure if this relief plaque was part of a small (personal?) shrine, part of a public building, or even a sign above a brothel. One earlier theory held that it was a depiction of the biblical Lilith, or the (related) Assyrian myth of a kind of succubus, both associated with wasteland and screech owls. The general view today is that this plaque does depict Ishtar because:


So, while the picture at the start of this post does indeed show a well known depiction of Mesopotamian Ishtar, this has no connection or correlation to the Easter festival which derives it's name from the Germanic deity Eostre/Ostara!
Posted by Unknown at 02:51